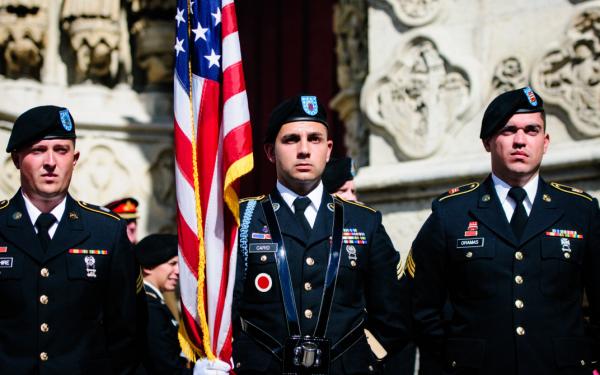 Veterans Day is celebrated every year on November 11th. When the day falls on a Sunday, the following Monday is designated a federal holiday in order to provide additional time for the observance. On Veterans Day, celebrations and events such as parades and memorial ceremonies are organized around the country to honor American Veterans of all wars. The difference between Veterans Day and Memorial Day is that we celebrate all Veterans, fallen or living, on Veterans Day. Memorial Day honors soldiers who have died.

Veterans Day was originally called Armistice Day. On the eleventh hour of the eleventh day of the eleventh month in 1918, the Armistice ending World War 1 was signed. World War I, also called the Great War, was a devastating international conflict that left behind carnage, destruction, and death unlike any other. Many warfare tactics and weapons were used for the first time during WWI, contributing greatly to the massive destruction the war left behind. Some of these firsts included the enlistment of women, chemical warfare, flamethrowers, the use of tanks and aircraft carriers, aerial warfare, and wireless communication.

The following year, 1919, President Wilson called for November 11th to be a commemoration of the event. Wilson stated, “To us in America, the reflections of Armistice Day will be filled with solemn pride in the heroism of those who died in the country’s service and with gratitude for the victory, both because of the thing from which it has freed us and because of the opportunity it has given America to show her sympathy with peace and justice in the councils of the nations…”

Armistice Day officially became a legal holiday in 1938, and was changed to Veterans Day to honor all veterans of all wars in 1954, after the tremendous efforts of American Service men and women in World War II and the Korean War.

Veterans Day began as Armistice Day in 1919. The name was officially changed to Veterans Day in 1954. In 1971 – 1974, Veterans Day was observed on the fourth Monday in October to align with the Uniform Holiday Bill passed by congress in 1968. The bill intended to ensure that federal holidays created three-day weekends. However, because of the historical significance and to retain a more authentic observation of the holiday, President Gerald Ford  changed the date back to November 11th in 1975.

How to Thank A Veteran

There are many ways to thank and honor a Veteran. Here are a few suggestions to help you show your support.

In Flanders fields the poppies blow

Between the crosses, row on row,

That mark our place, and in the sky,

Scarce heard amid the guns below.

We are the dead; short days ago

Loved and were loved, and now we lie

Take up our quarrel with the foe!

To you from failing hands we throw

The torch; be yours to hold it high!

If ye break faith with us who die

We shall not sleep, though poppies grow

Heidi Deal is the author of Perspectives on the Civil Rights Movement and other educational children’s books. She specializes in elementary through high school level resources about history and improving human rights.

How to Apply for a VA Veterans ID Card